Home About the city Contacts

UNIVERSITY OF BIELSKO-BIALA - UNIVERSITY FOR YOU!

This time team has visited Pszczyna city and castle museum, as well as famous bisons' park.

There were the excursion to the famous castle of Princess of Pless, Daisy. The excursion has presented the numerous chambers of the famous castle of Princess of Pless. Daisy and her husband Hans Heinrich XV had interesting taste in mixing the cultures in the interiour. There were numerous chambers with trofeis from Europe and Asia of the hunting period. That is to say all walls were decorated by the hornsor furs of animals, you can see it on the photo. From another side, Daisy's part of house was done in blue, pink or yellow color and there was no sign of cruel habit of those time. The most significant chamber is the dinning room, which has height of 2 floors and enormous mirrors. On picture it is presented.

Bisons are huge and peaceful animals. Living in special parks, this endangered species has become an intertainment for visitors. As well in park there is living
peacocks, foxes, numerous subtypes of deers and ducks, donkey. Spending in park around hour, Erasmus+ team went to one of the last point of the trip - the  ancient crafts park

Before the day has been finished by the delicious lunch in "karczma". Tasty both vegetarian and ordinary dishes with dessert named " Szarlotka" have charged with energy. And this is how the trip was finished.

Join us on our May events!

Presentation about
Our University 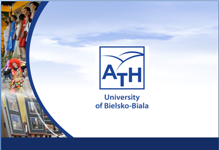 The Center of International Exchange  of the University of Bielsko-Biala is pleased to present an offer of Polish as a foreign language!

We offer the following courses in the 2019/2020 academic year:
Enrollment for the courses: Communication in Polish is open - the course or courses will start as soon as the appropriate number of participants has gathered.
More information in attachment "POL-2019-2020"
download attachment
Registration via the application form:
kursj-polskiego.webankieta.pl – fill out the form
If the group is interested, it is possible to continue the course (+ 60 hours).

The courses are run by experienced academic teachers.
The program covers all skills (reading, writing, speaking and listening), grammar issues and general vocabulary, thanks to which participants acquire adequate knowledge to build and understand oral and written statements for active communication.
read more>
09 September 2019
Information
Company LLC „PHILADELPHIA-TOUR” is a partner recruitment company of the University of Bielsko-Biala for Middle East area.
read more>
© 2016 University of Bielsko-Biala. All rights reserved. admin | ↑ Тоp